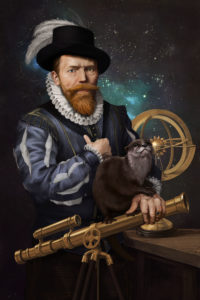 Thomas Woodhouse created a way to reach the stars and moved freely between our world and Bèlmounae, the world of the Fae of North America.

Thomas Woodhouse was a gentleman wizard, born in England on a great estate in the Sussex countryside. Like many affluent and noble-born wizarding families in England after the witch trials of the sixteenth century, the Woodhouses had withdrawn into seclusion at their manors; they preferred to be thought of as eccentric recluses rather than risk exposure as practitioners of magic. The Woodhouses were fortunate that none of their relatives had fallen victim to the persecution that other mages faced, but they had seen it happen to far too many of their colleagues and friends, and therefore resolved to stay as hidden as they could, and travel as little as possible. This, of course, meant that Thomas Woodhouse grew up to be one of the most celebrated voyagers and most widely-traveled people of his day.

When he was a child exploring the grounds of his family’s estate, Thomas Woodhouse noticed a passage into a hollow hill that he had never seen before and realized he had stumbled upon an entrance to the realm that he knew as Faerie. He spent no more than a day in that strange and glittering realm before he stumbled out again into England. The next day, he went back to search for the passage again, but could not find it. It was the greatest heartbreak of his young life. Forever after, he felt the call to return and yearned to follow it, searching for the door back to Faerie that he knew must be there.

Throughout his youth, Woodhouse received the best education available to a gentleman of his station. Private tutors taught him the latest advances in magical theory, especially those associated with the Renaissance Reforms, and the newest developments in astronomy, divination, and celestial navigation. It was the last of these that fascinated him the most. He immersed himself in the records of great wizarding navigators of the past – Saint Brendan, Leif Eriksson, Zheng He, and more – and tried to work out a grand theory that combined navigation by the physical positions of the stars, astromancical divination, and interdimensional translocation. He was sure that such a unified theory was possible; like so many of the great truths of the universe, it was already there and was just waiting to be discovered through human intelligence. He resisted his parents’ urging to settle on his own estate, or to get married, or even to go to university: he never wanted to create any more ties to the earthly realm than he had to, for he felt that he needed to be ready to depart at any moment when he heard the call back to Faerie.

Woodhouse finally got the chance to travel beyond the boundaries of England and to test his scholarly theories when he was hired as magical navigator for Henry Hudson’s voyage to find the Northwest Passage. This was a pathway theorized to run through Faerie roads that would allow travelers to cross North America in a fraction of the time. European contact with fae in the New World had until that point been rare and dangerous, but colonizing wizards were increasingly certain that Faerie roads did exist in North America – and therefore, they wanted to use those roads to their own advantage for magical and economic profit. For that reason, wizard navigators accompanied many of European voyages of exploration. Mundane ship captains and explorers were happy to get help from mysteriously knowledgeable passengers, and happier not to ask any questions. Hudson himself actually knew that Woodhouse was a wizard, but nobody else on the ship did, and one of the conditions of Woodhouse’s presence was that he not reveal his magical abilities. Therefore, the rest of the mundane crew believed that Woodhouse was simply a scholar and mathematician, a passenger taken on as a favor to one of Hudson’s aristocratic patrons.

After many arduous months of travel, Woodhouse and Hudson felt that they were on the verge of finding the Northwest Passage, but it was too late. The winter of 1610-11 had just been too hard on the crew, and in June 1611 the half-starved, half-frozen, and ill crew mutinied. Woodhouse could have confessed the true nature of the voyage, or used magic to persuade the crew to stand down,  but to do so would break the boundary of secrecy between the magical and mundane worlds, something Woodhouse had sworn never to do. And so Woodhouse was abandoned on an uninhabited stretch of frigid coastline, along with Hudson, Hudson’s son, and several other members of the crew.

After a week of wandering through the frozen empty land, Woodhouse’s navigational spells picked up a beautiful and painfully familiar sound: the call of Faerie. Woodhouse had been wrong about the existence of the Northwest Passage, but he was right that their voyage was heading towards a pathway out of the earthly realm and into another one. His greatest hope had been realized, and the realm where he had felt the greatest joy of his life was within reach once more.  This meant that for the second time, he was faced with the choice of whether to keep silent about the existence of magic. He could easily have gone into Faerie alone, leaving his shipmates behind to simply believe that he had disappeared. Yet he felt guilty that his silence had endangered them before, and, perhaps, he wanted to share the joy of Faerie with someone else. So he made the decision to reveal the existence of magic and Faerie to his shipmates, and led them into the hidden lands.

What they found there was a realm of transcendent and radiant beauty, filled with fragrant flowers, summer warmth, and unearthly music. What Woodhouse and the other Europeans called Faerie was called Bèlmounae by those who inhabited it, and they called themselves Miroven. These were of the Waakki, or Summerlands Court, favoring serenity and concord — albeit a kind of harmony that seemed capricious because it obeyed rules that no human could discern or comprehend.

That is as much as is known of Woodhouse’s time in Bèlmounae. He was the only one of the group that was ever seen again, and he did not speak of what happened after he went through the doorway, save that it was a passage to Bèlmounae. It is likely that he could not speak of it, for the Miroven often place a geas on those who enter their lands. What is known is that Woodhouse emerged in Virginia twenty years later, not looking a day older than when he had entered. He carried with him a collection of elaborate star charts: some detailed representations of the constellations visible in of North America; some that did not match the positions of any known stars. This has led some scholars to speculate that the Waakki who rescued him and his shipmates were of the Northern Lights Regency, which has an affinity with the element of Air.

Woodhouse spent the rest of his life voyaging: over land through the deep forests and broad prairies of the northern reaches of North America; over sea around the stormy waters of the Atlantic; in and out of Bèlmounae. He is the only human known to have made even a partial map of the roads of the Miroven, although when he attempted to circulate it among other wizards, the parchment had an unfortunate tendency to turn into butterflies upon arrival.

Still, it was his mapping of passages through Miroven that brought him to the attention of Peregrine Myles Brewster, second chancellor of Imperial Magischola. Brewster could tell that Woodhouse’s skills at navigation and divination alike were unmatched. These, along with  Woodhouse’s descent from distinguished English Unsoiled lineage and his Renaissance education merited the invitation to join Imperial Magischola’s faculty in 1658.

All of the prospective Court founders were challenged to perform a Great Deed to prove their worth as wizards. They all quickly discovered, though, that their efforts were also necessary to save the school from great peril. A Great Corruptor had been plaguing Imperial for over a decade, attaching itself to Chancellor Leodegrance. Agrippa Court founder V.H.P. Steinkraft had discovered the Corruptor’s presence, and Paracelsus Court founder Isaac de Lucena recognized that the Corruptor’s presence had also disrupted the ley lines that converged on the Imperial campus. Only Woodhouse, however, saw the damage that the Corruptor had caused beyond the physical realm. The damage to the ley lines, combined with the Corruptor’s presence, was pulling in echoes from other timelines. This was among the causes of Chancellor Leodegrance’s paranoia and delusion: there were places on the Imperial campus where it was truly no longer possible to tell what was real and what was not.

It took all of Woodhouse’s skill at navigation and cartography to calculate the correct coordinates so that he could help secure the campus’s location in time. The act of anchoring the campus became his Great Deed: be created a permanent tether for concentrated access to other realms and other times, including a permanent portal to Bèlmounae. These passages between the realms still stand on the Imperial campus today, although it takes a great deal of skill and training to be able to access them.

As the namesake of his Court, Woodhouse chose Ptolemy of Alexandria, the Greek philosopher, geographer, astromancer, and polymath. Like many Renaissance scholars both magical and mundane, Woodhouse saw himself and his students as heirs to a lineage of intellectual achievement that stretched back into antiquity.

While he had numerous intellectual descendants at Imperial Magischola, it is still unclear whether Woodhouse had any actual children. Over the centuries, many people — Unsoiled, mixed, and even some part-fae — have claimed descent from Woodhouse. Nobody has been able to offer definitive proof, though, and it has been surprisingly difficult to use divination to examine these claimants’ lineage.

Nor can anyone consult Woodhouse’s own records, for he left none. He did not remain at Imperial Magischola for long: in the winter of 1660, he simply did not show up for class. Some believe he may have attempted to travel especially far into the astral realms and was unable or unwilling to return. Others observed that the Northern Lights were especially bright that night, and think that he may have found his way back into Bèlmounae.