In the 400 years of the Magimundi, there has only been one Arch Justice for Destiny Province, Herodotus Forsythe.

Some say he was the founder of the Magimundi.

Wizards live a long time, but rumor has it Herodotus was not alive for many years. Rather his tenure was magically prolonged and he himself artificially animated. A lich with no soul, a bargain made.

He has disappeared for some time in years past, but this time, it looks like Herodotus isn’t coming back. Confirmations of his death have come in, and the propped up daily governance by Bertram and Herodotus’s very capable fonctionnaires has come to a close.

The grand families of Destiny demand a new Arch Justice. It is time.

But the Province has no succession system. It simply hasn’t been done.

Guidance from the Provincial founding documents seems to point to martial prowess and sheer magical power as determination for the Arch Justice mantle. Surely that standard has not stood the test of time.

The bickering and backstabbing, the power struggles and backroom deals, the bribes and the secret alliances all end today. At the Destiny Conclave.

Six candidates for the office have arisen: Cuthbert Ostrander, Artemis Pliny-Oehler, Bertram Forsythe, Garfield Radcliffe-Forsythe, Thérèse Wattenhammer, and a wild card that has not been announced. These six, along with representatives of the influential families of the Province and obligatory mundaneborn and mixed heritage electors, added to appease progressives, will be sealed into a warded chamber and may not emerge until an Arch Justice has been appointed.

Deals will be made. Curses may fly. Favors called in. Promises extracted. It’s pull-out-all-stops political machinations, and the pockets that fund them in a pressure cooker that only ends when someone is monarch of the mountain, even if they stand on the bodies of their foes.

The experience lasts 12 hours, from noon Saturday to midnight, and includes food and non-alcoholic beverages, as well as a custom written character and story, plots, organization, talent, venue rental, insurance, fees, and production costs. Alcohol will be available for purchase.

This experience will be tightly focused, with the end goal of appointing the Arch Justice. Every attendee has a vote and a stake in the process. Who will you throw your vote behind?

Where: German Society of Pennsylvania, Philadelphia

Price $175, including food and non-alcoholic drinks.

This is your chance to influence canon.

The choice you make at this event becomes the second justice of Destiny Province and the lore that players will create with for years to come. Arch Justice appointments are for life. 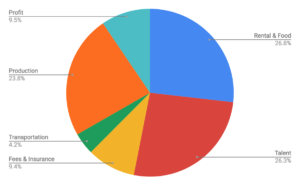 Costs for the production are seen at right, with roughly equal parts of the ticket price for the venue rental plus food costs and the costs for talent, which includes writers, graphic designers, artists, onsite director and interactors. Production category includes props, costuming, supplies, lighting, effects. Transportation includes the costs of getting our staff and production materials to and from the site and costs for lodging while running the event. Fees and insurance encompass a per-person cost for the two-million liability coverage we must carry, as well as credit card fees, cleaning fees, etc. Profit is set at roughly 10% of the ticket price, per ticket. If you do the math with 30 tickets available, the profit margin is quite meager. However, we are seeking to keep this event small, affordable, and accessible. This event is very important for setting up canon for 2019 and beyond. Won’t you take part?